skip to main | skip to sidebar

A few weeks ago an old Salem Police badge was added to the collection. This afternoon in the mail I got a reply from Chief Tucker about the badge. The only information ha had about the badge is that they were used up to 20-22 years ago, when they switched to the current issue badge. He also said some of the older officers were using them 30 years ago, when he joined the force.


I'd also like to thank Chief Tucker for replying to my letter, as well as the gracious gift of this newly minted Salem Police Department "Challenge" Coin. 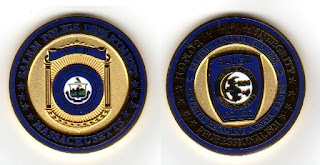 Posted by Paul Plecinoga at 7:18 PM No comments: 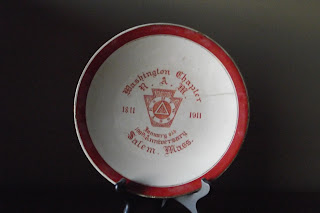 This afternoon I went to Witch City Consignment and this is what followed me home. This plate was made in 1911 by Thomas Maddox Sons and Company of Trenton, New Jersey to commemorate the 100at anniversary of the founding of Salem's Masonic Lodge. It's quite interesting that I got it today, which is the 30th anniversary of the arson attack on the lodge building.

The front of the plate says Washington Lodge R. A. M. (Royal Arc Masons), 1811 - 1911, January 9th, 100th Anniversary, Salem, Mass surrounding their emblem. It's not in the best of condition as there is a crack running through the piece.

Posted by Paul Plecinoga at 7:13 PM No comments:

Welcome to the New SalemArchives.org

We have just went online with the new updated SalemArchives.org.  It is still the online home of the Salem Collection Archives with just a few changes.

The major change is we have changed how we display the items. We will no longer showcase every single item. It was decided that only a sampling would be a better fit for a slimmed down site. Some of the categories have been condensed, it's quicker to see the items and an all around better flow to the site.

New interesting items will still get featured on the site for permanent display. As well as new pieces will also continue to have blog posts and get mentioned on our twitter account.

Thanks for your support!
The Salem Archives Team
Posted by Paul Plecinoga at 6:59 AM No comments: